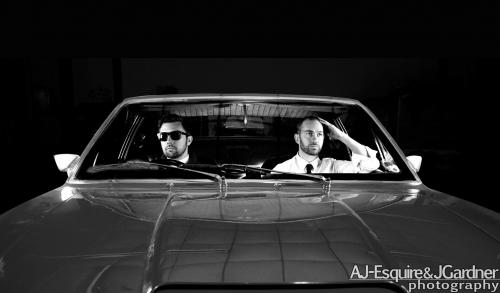 Bonar Bradberry and Tom Thorpe met while record digging in Birmingham, UK. Recognizing a compatible taste by their pickings, the two decided to DJ together and soon were immersed in the circus that was early 2000s Leeds nightlife. By 2003, the duo had founded their own residency at Club Mint, named “Asylum” to reflect the evening’s maddening diversity of guests. Everyone from Jazzy Jeff to Ricardo Villalobos shared the decks with the duo, by now having settled on the moniker PBR Streetgang. DJ Broadcast points out that while their name is lifted from cult classic war film Apocalypse Now, “the only shallow waters these two patrol, however, are those situated around Ibiza.” Indeed, PBR that same year became residents world reknown party We Love… at Space in Ibiza. Working their way from one-offs in smaller rooms to eventually landing the closing slot, talent buyer Andy Livesey remarks “they embody everything we look for in a We Love Space resident.”

Beginning in 2008, the duo slowly but surely produced a slew of EPs and singles for the labels Red Music and 2020 Vision, the latter of which Bonar would go on to serve as assistant manager of A&R and head manager for remixes. By 2012, the duo had expanded to other notable labels coming out of the UK scene. Mixmag deemed their Futureboogie debut ‘N-H-N’ a “ridiculously repetitive acid gem”, while their single ‘Downstroke’ for Hot Creations was praised by Resident Advisor for its “dark, oppressive, humid atmosphere.” Not forgetting their roots, the 2020 Vision release ‘At Dez’ solidified the “PBR [...] trademark production style that utilises their love of a body shaking baseline, crisp beats, quirky samples and a unifying groove,” explains IDM Magazine.

The duo’s remix output has been built up along the same trajectory as their originals, beginning with friends Crazy P and Maxxi Soundsystem, but soon growing outside of the UK dance world. This includes what Spin Magazine calls their “deliriously dancey” remix of Lana Del Rey’s ‘Ultraviolence.’ After jumping across the pond in 2013 for a debut tour, NYC label Throne of Blood solidified PBR’s conquering of international waters with 2014’s Achilles EP. In Resident Advisor’s words, the title track “sets of with a gait of a bagner, but it soon melts into a sun-dappled piano house charmer.” Ten years in the making, these “technically sound selectors”, according to Mixmag, have “secured spots at clubs and festivals the world over.”